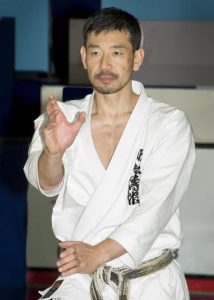 Kancho Nobuaki Kanazawa, 8th Dan, was born in May 1972 and is the eldest of the late Soke Hirokazu Kanazawa’s three sons. Kancho (隊長) means head or captain, and it is this role that Kancho Kanazawa fulfils for both SKKIF (our association) and SKIF (our international umbrella organisation); he frequently travels the world hosting seminars and gradings.